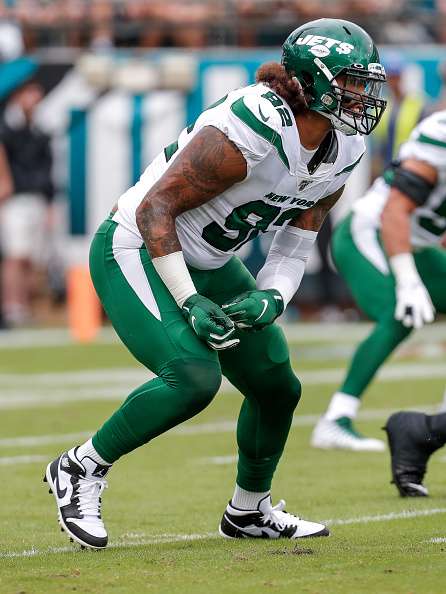 The Jets couldn’t find a way to keep the momentum going following their first victory of the 2019 NFL regular season in Week 6, as they got crushed by New England on both sides of the ball en route to a 33-0 loss in Week 7. New York now sits in the basement of the AFC East with just a 1-5 record overall, only slighter better than the winless Miami Dolphins. QB Sam Darnold was horrific in his second game back following a battle with mononucleosis, going 11-for-32 for 86 yards and a career-high four interceptions, plus a fumble lost.

Darnold was certainly in the spotlight for all the wrong reasons on Monday night, as his “I’m seeing ghosts” line was picked up by the national television broadcast and instantly went viral. RB Le’Veon Bell didn’t do all that much on the ground, rushing for 70 yards on 15 carries and failing to find the end zone. Veteran wideout Demaryius Thomas led the way for the receiving corps despite making just three catches for 42 yards. Things didn’t go any better on the other side of the ball for the Jets, as they gave up well over 300 total yards of offense to Brady and Co. including three touchdowns to RB Sony Michel.

The big divisional loss had a major impact on many New York Jets betting markets, including their chances at winning the AFC East. After heading into the game against the Patriots at +10000, they have now fallen to +25000. The Jets playoff chances also decreased substantially, dropping from +520 to +900. Finally, their season win total over under prop moved back to 5.0 games from 5.5 games.

New York will look to rebound heading into a Week 8 clash with the Jacksonville Jaguars on the road. The Jags finally dealt disgruntled star corner Jalen Ramsey prior to their Week 7 win over Cincinnati, so Robby Anderson could have a chance to shine downfield against a somewhat depleted secondary. As things sit right now, the Jets are six-point underdogs in a game that features a 41.5 point total.

It seems extremely likely that Darnold has almost no shot at the“ Most Regular Season Passing Yards” crown, as he sits at +15000 at some books, while others have taken him off the board completely. Patrick Mahomes, Matt Ryan, and Tom Brady are all still firmly in the mix despite lackluster showings by both Mahomes and Ryan in Week 7.

Darnold is also an astronomical longshot to win the MVP award, as he is currently available at +10000. The same can also be said in regards to Le’Veon Bell’s chances of taking down the “Most Regular Season Rushing Yards” award, although Bell did move up from +10000 to +6000 after the weekend due to injuries to both David Johnson and Kerryon Johnson. The four front-runners for the rushing crown appear to be Christian McCaffrey (+380), Dalvin Cook (+300), Leonard Fournette (+380), and Nick Chubb (+420) heading into Week 8 of the regular season.