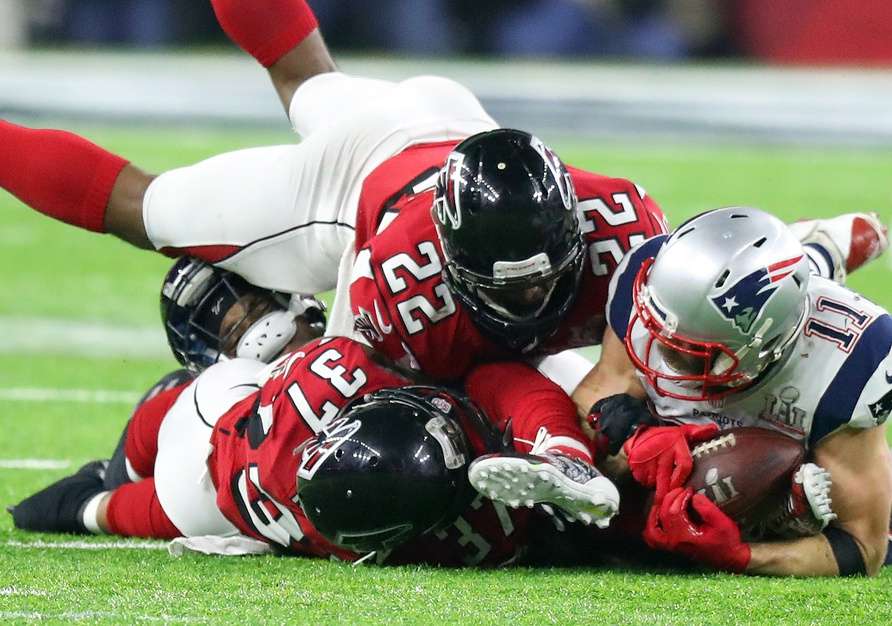 Super Bowl Sunday is like no other day in sports and no single sporting event receives more attention. From the multi-million-dollar commercials to the 6-hour pre-game show and halftime extravaganza no other football game has more distractions than the Super Bowl. But for true sports fans the biggest hope for Super Sunday is that they are able to witness a good game and if you’re lucky maybe even a classic.

As a child of the 80’s I grew up seeing more than my fair share of non-competitive Super Bowl games. It seemed as though there was stretch where the majority of Super Bowl games for over a decade were blowouts or at the very least unexciting. We went quite a while without a real classic Super Bowl game that came down to the wire. Recently though we have had pretty good run of interesting and competitive games that have certainly provided some classic finishes. Here is my list of the Top 5 Finishes in Super Bowl history.

On February 5th, 2017, the New England Patriots and Atlanta Falcons provided fans with a classic game.  After going down 28-3 mid way through the third quarter, the New England Patriots would mount the biggest comeback in Super Bowl history defeating the Falcons 34–28 in overtime. While the final play (a 2-yard James White TD run he had no business scoring on) wasn’t the most sensational final play we have seen, everything leading up it was. The Patriots would score 25 unanswered points to force overtime and it is still the first and only Super Bowl to be decided in an extra period.

In a defensive battle that featured five field goals between the two teams, Joe Montana would go on to lead a classic game winning drive to seal a 20–16 victory. With 3:10 remaining in the game and the ball on their own 15, Joe Montana entered the huddle with his team and instead of giving the play call he decided to take the edge off a bit and point out one of his favorite actors sitting in the stands; “Hey isn’t that John Candy?” he asked to his teammates, while pointing out Candy in the crowd. The drive that ensued would culminate in an iconic 10-yard touchdown pass to Jon Taylor with 39 seconds left, further adding to the Montana legend and solidifying him as one of the greatest quarterback of all time… until some California kid game along to supplant him.

Entering the fourth quarter down 20-7, the Arizona Cardinals, led by Kurt Warner, scored 16 consecutive points. That run included a safety and was capped by a 64-yard Larry Fitzgerald touchdown catch that finally pushed the Cardinals into the lead with 2:37 remaining. With the ball at their own 22-yard line and the Super Bowl on the line, Ben Rothlisberger and the Steelers would move themselves all the way to the Cardinals 6-yard line where Santonio Holmes would make one of the most memorable catches in Super Bowl history.

With Rothlisberger hanging tight in the pocket and unable to find his first option, he threw an incredible pass—over three Cardinal defenders—to the back corner of the endzone where Holmes would make a picture perfect side line grab, keeping his toes in bounds and securing the win for Steelers and the eventual MVP award.

Despite having one of the league’s best offenses and outgaining Tennessee 294-89 in the first half, St. Louis was only able to take a 9-0 into halftime against a scrappy Titans team. Mid way through the third quarter a 9-yard touchdown pass from Kurt Warner to Torry Holt gave the Rams a 16–0  edge.

Two well executed drives and two Eddie George touchdown runs later, and the Titans cut the lead to 16-13. A 43 Al Del Greco field goal with 2:12 remaining would tie the score at 16 and, at the time, was the largest deficit erased in Super Bowl history. On the possession that followed Warner would find Issac Bruce on 73-yard touchdown pass to take a 23-16 lead. With the game still in the balance and the Titans taking over from their own 12 with 1:48 left, Tenness would drive 68 yards all the way to the Rams 10-yard line where they would take a timeout with six seconds left.

Only six seconds left… with a chance to tie… or even win the game… with a two-point conversion. On the game’s final play Steve McNair would find wide receiver Kevin Dyson on quick slant inside the 5-yard line with only one man to beat. As Dyson tried to take the inside route on the perfectly thrown slant, Mike Jones leaped and twirled his body in a perfect alligator roll, bringing Dyson’s body down at the 2-yard line as Dyson extended his arm, reaching for the end zone only to come up one yard short of the goal line in a play that has become known simply as, “the tackle.”

The 16–0 New England Patriots came into Super Bowl 42 as heavy 12-point favorites and everyone was expecting them to complete the Perfect season. Well, Eli Manning and the New York Giants had other plans and the way in which the pulled it off will go down in Super Bowl lore forever. In a defensive battle that saw only 10 points through three quarters we knew we were in for good one. A fourth quarter that produced a Super Bowl record three lead changes did not disappoint.

New England would take a 14–10 lead after a Tom Brady to Randy Moss touchdown pass leaving New York with the ball down four on their own 17 with 2:39 left in the game. On a 3rd and 5 from his own 44, Eli Manning and a little known David Tyree would hook up on a 32-yard pass play that saw Manning escape multiple sack attempts (thanks to several blatantly missed holding calls) only to wildly fling a jump ball for Tyree. Tyree somehow secured the catch by pinning the ball against his helmet on his way to the ground.

The ensuing plays would see Manning lead the Giants all the way down to the Patriots 13-yard line. A slant route to Plaxico Buress for the game winning score would cap a 12 play 83-yard drive giving the underdog Giants the most improbable of victories.