The New York Red Bulls are a professional American soccer team based in Harrison, New Jersey. Originally founded in 1994, the Red Bulls compete in the Eastern Conference of Major League Soccer (MLS).

Formerly known as the New York/New Jersey MetroStars, the team was sold to Red Bull GmbH in 2006. While the club currently plays out of Red Bull Arena, their former home was Giants Stadium. The Red Bulls are one of two teams located in the greater New York area, as New York City FC plays on the other side of the Hudson River.

The club also boasts a very impressive training facility, as the six-million dollar property contains four fields (three grass and one turf) located on around 15 acres of land. The grass surface is also heated, while the rest of the complex features a wide variety of team offices, several weight and pool areas, a players’ lounge, therapy rooms, and even a cafeteria.

Despite making the MLS Cup Final in 2008, the Red Bulls have never won the league championship. However, the team has won three regular season Supporters’ Shield titles, which is awarded to the club that has the best overall record prior to the start of the playoffs. They have also reached the U.S. Open Cup final twice, although they came up just short in both 2003 and 2017.

Between 2006-2009, the club played out of Giants Stadium and experienced their fair share of success. Despite being the last franchise to qualify for the playoffs in 2008, the Red Bulls enjoyed a Cinderella postseason run and played themselves into the league championship against the Columbus Crew. After losing 3-1 in the MLS Cup Final, the team had a brutal 2009 season that included an embarrassing 16-game losing streak. As a result, the ownership group cleaned out the entire front office heading into the next decade.

After hiring Swedish manager Hans Backe as the head coach in 2010, the Red Bulls made a huge splash in free agency by signing world renowned French striker Thierry Henry. Although Henry never managed to lead the club back to the promised land, he did bring a ton of attention to the Red Bulls before retiring in 2014 at the age of 37.

Click Here to Bet on the New York Red Bulls

While Henry is certainly the most famous player in Red Bulls history, there have also been many other very successful former national-team members on the roster as well. Bradley Wright-Phillips, the clubs all time leading goal scorer (125) played for England and has been with the club since 2013. Tim Cahill, who is still the all-time leading goal scorer for Australia at the international level, also played for the Red Bulls between 2013 and 2015. 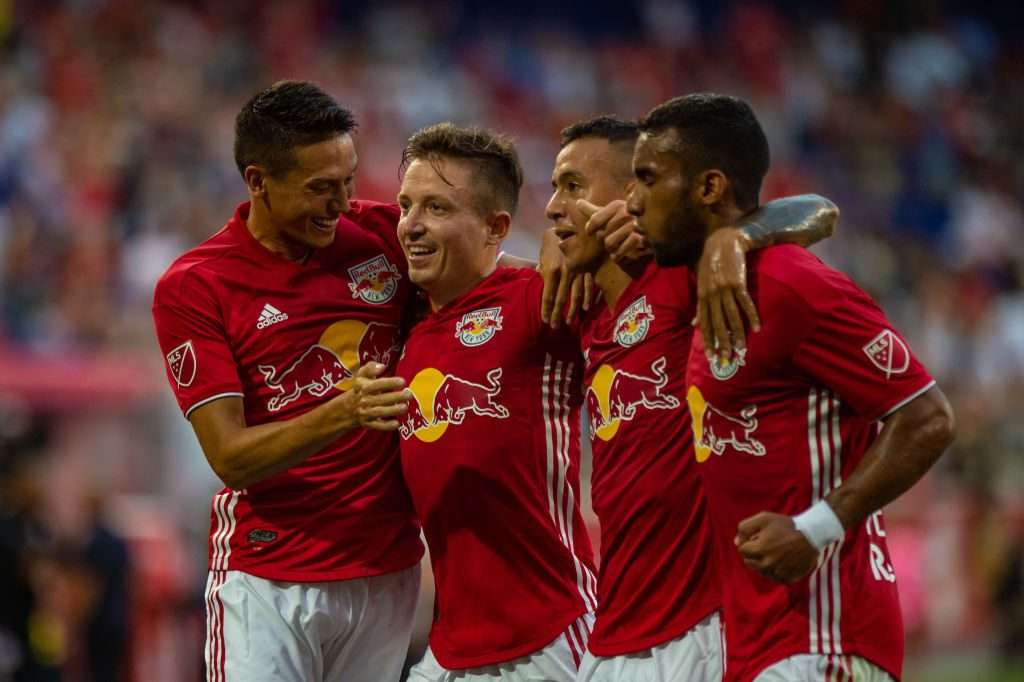 What Are the Odds on the New York Red Bulls Winning the MLS Cup?

Clint Mathis is probably the most notable American player in franchise history, as he was a member of the 2002 FIFA World Cup team that advanced to the quarterfinals before losing 1-0 to Germany. While Mathis did manage to score a goal in Korea/Japan, he is perhaps most famously known for scoring five goals in a single game for the MetroStars back in 2000.

After winning their third Supporters’ Shield in 2018 as well as qualifying for the 2019 CONCACAF Champions League, the future appears to be quite bright for the Red Bulls moving forward. Although they fell short of the MLS Cup Final in 2019 league play, they certainly have many solid pieces in place as their search for the league championship trophy continues.

Figuring out the New York Red Bulls betting odds is unlike any of the other major American sports. The reason is quite simple; when it comes to soccer, you can tie. Therefore, instead of having a favorite and an underdog and that’s it, there is actually a third option on the table for gamblers, “draw.” However, outside of that, the New York Red Bulls betting odds are like the moneyline from other sports where all the numbers listed are in reference to $100. If the Red Bulls are playing the Ph